I got a spontaneous job from the Sportsbackers last week: shoot the Patrick Henry re-enactor (from the previous year's Patrick Henry Half Marathon, and he also portrayed Dooley of Maymont fame during the Maymont XC Festival) for a life-size cut-out to be used for advertising the Half-Marathon in August.

So I called up Kevin Gantz of the Virginia Patriots (he plays George Washington) and we met at St. John's Church in Church Hill. I brought Willem with me to help out in case we had to set up some flashes. Luckily, the sun was great and the white exterior walls of the church bounced the light back perfectly.

We shot about 200 photos in all sorts of poses as 'Patrick' and Willem talked about what Playstation 3 games are the most fun. I think Willem got a kick out of watching it all. He demands a high salary, though, since I promised I'd pay him for helping - which is far easier now that he's 7 than trying to find a babysitter for 2 hours at 4 in the afternoon.

I decided after the shoot to break out my Scott Kelby book "Photoshop CS2 for Photographers" and cut the background out just for fun. Apparently the printer is going to take care of this for the Sportsbackers, but I just wanted to dust off my Photoshop skills (since the only time I ever seem to use the $1700 Creative Suite is to make funny 'separated at birth' pics for Facebook amusement). Thanks to the Extract tool and the History Brush, it only took me about half an hour to pull this off: 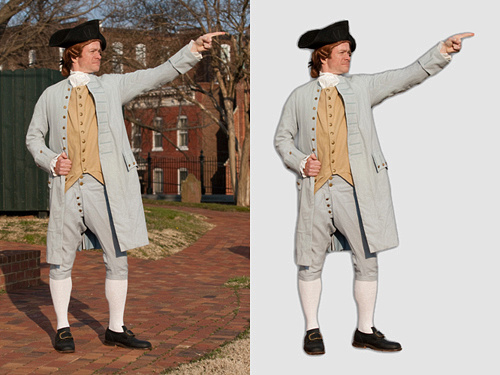 Jeff
http://www.printradiant.com | http://www.hitsticker.com | http://www.stickermac.com | http://www.cpdloop.com
No comments posted.
Loading...
Subscribe
RSS
Recent Posts
The Ebb & (Work)Flow Calling the Shots Road to Nowhere Is Death the 'D' in DSLR? What is with the "2-song" access?? My Cup Runneth Over... And they're "OFF!" A Monument(al) Race 1st Grade is a Jungle! Patrick Henry and Photoshop
Keywords
Archive
January February March April May June July August September October November December
© b a c k l i g h t
User Agreement
Cancel
Continue